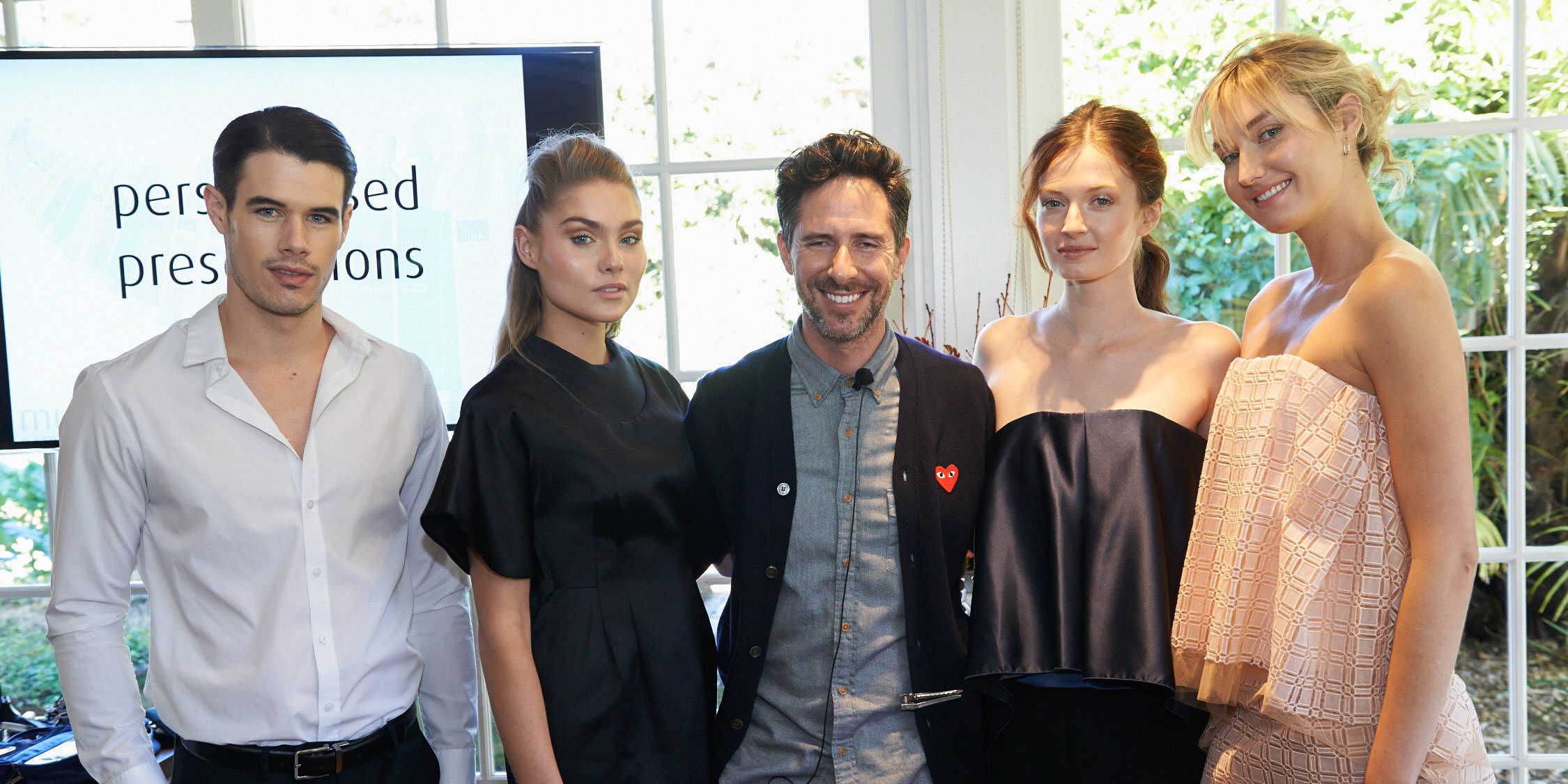 An intimate lunch with muk Haircare and Anthony Nader, RAW Hair On Thursday 10th July, muk Haircare hosted an intimate lunch for beauty media at the famed Chiswick Restaurant. Rather than launching a new product, the lunch was held to educate media about the brand, its beginnings and current range offering. Director and one of the founders of muk Haircare, Mark Gariglio, passionately discussed how the brand started from one simple product – Hard muk Styling Mud – to now a global brand available in 19 countries worldwide! To showcase the full effects of the range, Anthony Nader from RAW Hair in Sydney, presented key Spring/Summer trends using muk Haircare. The former Australian Hairdresser of the Year and Australian Editorial Stylist of the Year is a muk fan using the products in his salon. Currently in Sydney for a short while from his second base, New York, Anthony created stunning yet simple styles that have been translated from the catwalk to the street and can be easily achieved at home with the right products. As guests dined on shared plates of wood-roasted lamb, trevally sashimi, parmesan gnocchi and seafood cioppino, Anthony worked his magic on three female models and one male model to showcase the simplicity and brilliance of the muk products. Models dressed in ELLERY and Tony Bianco shoes were elegantly presented with the following key Spring/Summer trends: Fish Braid pony Using the muk Style Stick, the hair that is left out is slightly waved to create texture. Some of the underneath sections are crimped so when you walk there is an element of ‘wow what’s under there?!’ And don’t forget to accessorise. Use a small feather at the base of the hair as a statement piece. Then the final look is finished with a light spray of muk Spa Argan Oil Shine Spray Braids of all sorts are in this Spring/Summer but the fish tail makes the biggest impact. Not an easy style to achieve at home however you can create your own interpretation or go into a salon! The foundation of this style however can be achieved easily. Hair was washed with Fat muk Shampoo and Conditioner and Fat muk Volumiser was sprayed in the roots and body of the hair when damp and blow-dried straight. A section was taken from the crown and stretched tight around the sides and a fish tail braid created at the back. The hair is really tight and smooth around the sides so facial features are enhanced. The top of the hair on the crown is slightly raised with strands of the hair left out so it looks natural and wind swept. The casual chignon with a feathered fringe The partline of the hair is also a little haphazard – no straight lines. Once all the hair is curled, run your fingers through to separate and create that wild, care free look. Use Beach muk Sea Salt Spray for texture and hold. Remember the curls aren’t perfect – more frizzy like and as Anthony said, think ‘Alexa Chung’ on steroids!’ To turn this into an evening look, create an imperfect chignon using hair pins or accessories for texture. The hair is separated into 3 sections starting from the bottom. Pull the hair from each side of the head as if you are creating a ponytail. Twirl and pin into a messy chignon. Do the same with the second section above the first and then third above that. Use coloured or metallic hair pins in a criss cross manner to complete the final look. Then the final look is finished with a light spray of muk Spa Argan Oil Shine Spray The casual pony Fringes are in with all shapes, lengths and thickness depending on your style. This look promotes the feathered fringe with textured curls which can them move into a casual chignon. Hair is washed with Blonde muk Shampoo and Conditioner and prepped with Kinky muk Curl Amplifier. Hair is then dried and twisted straight around the smallest barrel of the muk curl Stick. Ends are left out for a beachy look. The idea is to create inconsistent curls. Nothing to structured or uniform. The looks is casual and wild Hair was washed using Deep muk Shampoo and Conditioner and prepped with Beach muk Sea Salt Spray and Kinky muk Curl Amplifier when damp. The part of the hair is again haphazard – no straight lines. Hair is curled using the muk Curl Stick medium barrel and pinned to the head in smaller horizontal sections. Hair is then brushed out to create a final fluffy texture to the hair. The hair is then stretched out with the blow dryer and put into a loose and low pony-tail with a very natural texture. There is height at the crown of the head and tight around the sides with floaty bits of hair free falling around the face and neckline for a natural, sexy feel. The final male model Liam was prepped with Hard muk Shampoo and then Fat muk Volumiser in damp hair. Hair was blast dried paying attention to the roots to create lift. For enhancing texture use a pea size amount of Hard muk Styling Mud and work through hair evenly. Going from loose and textured to chic and shiny is a no brainer here boys! Take a small amount of Slick muk pomade (about the size of a 10 cent piece) and work through your strands and comb through with a fine tooth comb. Now you look like your favourite from the set of Hollywood’s big time Mad Men series.